I'm playing catch-up, but here's the latest. Normal service will be resumed shortly and - believe it or not - 'Memries of Watford' will be a good 'un!

So we’re back where our last adventure in the Premier League all began over thirteen years ago – at home to Liverpool – where an outrageous decision by Rob Style cost us two points with the infamous ‘Morgan meant to foul Stevie G.’ 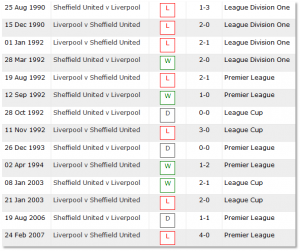 Ave the Blades ever played a more pre-eminent team than Liverpool – Champions of Europe, European Super Cup Holders and runaway leaders of the Premier League – at Bramall Lane? 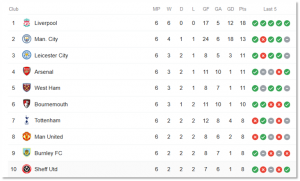 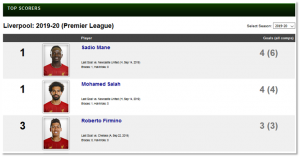 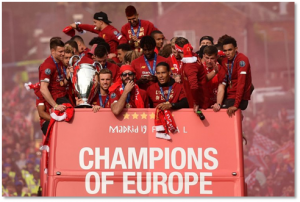 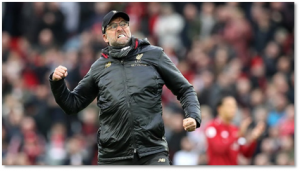 ​
Jürgen Klopp has been Liverpool’s manager since he joined The Reds from 18th October from Borussia Dortmund. His win% with Liverpool is a none-too-shabby 57.48 – the highest-ever for a Liverpool manager apart from Kenny Dalglish with 60.91%.

I saw the following in person:

1990-1 - 1-3 home defeat. Our top division return against the reigning champions. Sunny day. Highlight was Deano's goal. Sadly Rush's challenge on Tracey and Pembo's inability to catch saw us lose. It was surreal seeing that team at the Lane when I had no memory of us playing above the second tier.

1992-3 - 1-0 home win - a superb goal from Adrian Littlejohn against a flat Liverpool team who were in the doldrums, relatively speaking.

1993-4 - 0-0 at home - Boxing Day. United dominated the game, but Bruce Grobbelaar was brilliant and won them a point almost single handed. Given his other performances that season, we were unlucky. I remember an absolutely fantastic save from a header by (I think) Flo that he tipped around the post.

1993-4 - 2-1 away win: first away win of the season on 2 April. I stood on the Kop and watched Rush give them an early lead, before United fought back. Flo scored both goals and Franz Carr tormented their defence in the second half. Probably the most unexpected United victory I've witnessed live.

2002-3 - 2-1 win in the Worthington SF. The high point of Michael Tonge's career, which unfortunately for him still had another 16 seasons to go. 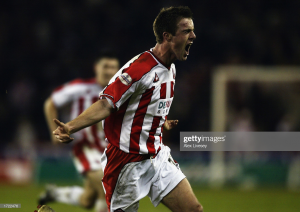 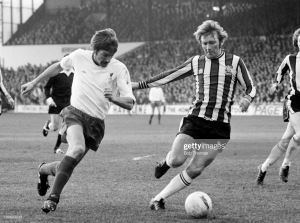 1971 - TC at is finest and head and shoulders above anybody on the pitch , not for the first time .

This is one of the best Liverpool teams ever it’s a really big ask. Our toughest test so far by a long shot but we won’t make it easy for them. Let’s get the lane rocking!!

Yep was there for Mel Rees and got very lucky the year after as the company I worked for got a couple of tickets from a car firm who were sponsoring the match. Got the tour, lovely meal, got a bet on Ade Littlejohn for first goal. Just a minute after being given a brandy somebody came and asked us to take our seats. Right down the half way line. Forgetting were I was I jumped up when we scored (about 10mins I think), got nudged back into my seat by my colleague. Tap on my shoulder, I was John Moore, he said great to see somebody with some passion in directors box. Met the players after, great day. 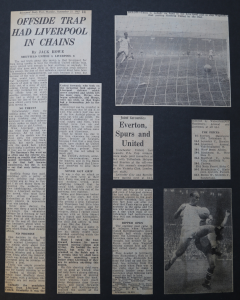 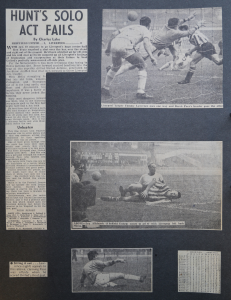 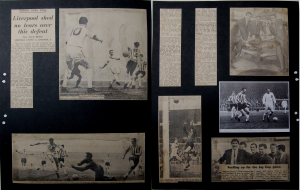 Terry Nicholl scores only goal of the match in April 1974 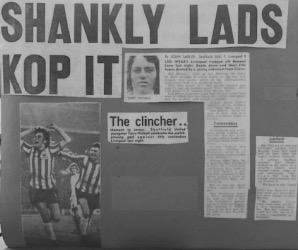 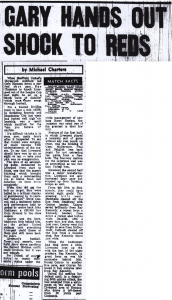 Even though I saw the league cup win at home v Liverpool under Warnock its not my standout memory v Liverpool. I sadly missed the Deano long range lob as a young 'un but I got a season ticket for 1993 1994 and witnessed us play Liverpool on Boxing Day. It finished 0 - 0 and sadly its not featured on our video of that season for some strange reason. It is on the Liverpool season video but of doesn't show the key Blades moment of the match:

We broke away and from memory two of our player were against one of theirs or something similar. One was definitely Jostein Flo. Flo was on the ball and he could have shot in the box but he chose to pass forwards and our other player was ahead of the ball at the time of the pass and it was given offside. I just couldn't believe it! Both were at fault but Flo must have known the other player was offside and should have shot. That was our moment and it could have well won us that game - who knows.

That's my main Liverpool memory, albeit I've rarely seen us playing them!
W

My favourite memory of Liverpool is being stood on the Kop as a 12 year old screaming for the ref to blow his whistle in the 1-0 victory which gary hamson scored in 78/79 season . 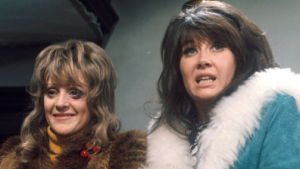 My first ever United game was Liverpool at home Oct 30th 1971 when I was 5. We drew 1-1, Tony Currie scoring for Sheffield United, Kevin Keegan for Liverpool. If you were to think of an iconic player from both clubs, you'd probably come up with those two.

One of my fondest memories is beating Liverpool 1-0 in 1974 with Alan Woodward sticking the ball past Ray Clemence emphatically, a finish which earned him the nickname The Executioner (possibly even from Bill Shankly).

Our relegation season of 1975/76 saw us turn in one of our best performances of the season - admittedly, there wasn't much to choose from - at Bramall Lane when we drew 0-0 with the team that went on to lift the title. Apart from Woody smacking the post with a low shot at the Kop end, my main memory of that game is a curious thing that happened before the kick-off, something I've never seen before or since. After the warm-up, Jimmy Sirrel signalled for all the United players to come over to the touchline by the dugouts (remember, they were on the John Street side back then). The team then sat along a red bench like schoolkids whilst Sirrel gave them a last ditch peptalk. It obviously worked as we played well and deserved a win that day. I remember thinking afterwards that if our manager had done this before every game we might not have suffered such a humiliating season.

For the shock League Cup win of 1978 we were on holiday in Cornwall, much to mine and EalingBlade 's annoyance. Our other brother, a part-timer to this day, somehow got out of attending the family holiday - possibly due to his apprenticeship with JW Northend starting - and chose to head to Bramall Lane, so that night we all crowded into and around a phone-box as my dad phoned him for the result. No-one was more surprised than EalingBlade's friend The Coop who joined us for the holiday; he was a Wednesdayite and for the rest of the evening he was staring into the distance with a stunned look on his face.

For our First Division return in 1990 we learned that John Pemberton was not the new Gordon Banks. For the away fixture at Anfield in December I arrived at the ground at 2.59pm with no ticket. A minute to kick-off, the streets around Anfield were completely deserted apart from one hopeful Scouser who approached me with the question, "Aaarite mate? Aaaah yer lookin' fer a ticket?" I was, but... "Don't worry mate, face value, and yer'll be sitting with me, me uncle, and all his mates, and yer Sheffield United mates will be just across to yer right." As we came up the steps towards our seats as the game got underway, my new friend announced to his uncle and several-thousand Liverpool fans, "This is my mate from Sheffield..." When Jock Bryson sent a dipping shot from 25 yards over Grobbelaar's head and onto the crossbar I felt comfortable enough to jump up in almost-celebration and then clasp my hands to my head when the ball thundered back off the woodwork. And when John Barnes waltzed through our defence to score, despite chants of "Get yer tights off for the lads" from the away contingent, and stuck the ball away, I sat there grumpily whilst all around me celebrated. Once they'd all calmed down again, Uncle Scouse ruffled my hair and said, "Well son, you've got to admit, that were class." Through gritted teeth I admitted.

The day Deano lobbed Bruce from 40-odd yards and Mel Reece had the game of his all-too-short life, I was at Woburn Safari Park with my then-girlfriend. If anything indicates why relationships are a crap idea, this is it. Fuck sake. At least I was there the day Adrian Littlejohn scored a beauty to earn us a 1-0 win. The irony is that earlier that day I'd purchased the album Independent Legs by Liverpool's finest, The Wizards of Twiddly (who are Gerry & the Pacemakers anyway?).

Despite the eventual result via an aggregate score, the two semi-final legs of the League Cup in the Triple Assault Season of 2002/2003 remain amongst the best nights I've had supporting the Blades, whereas our glorious return to the Premier League of 2006 only makes me think that Rob Styles should be locked in the lions' enclosure at Woburn Safari Park along with my ex-girlfriend.

It's been a long time; bring them on.

Greenwich Blade said:
One of my fondest memories is beating Liverpool 1-0 in 1974 with Alan Woodward sticking the ball past Ray Clemence emphatically, a finish which earned him the nickname The Executioner (possibly even from Bill Shankly).
Click to expand...

Shankly left Liverpool in summer 1974
B

Probably Bob Paisley, that match was on the same date 45 years ago
You must log in or register to reply here.

Do We Have a New First-Team Psychologist?