Benben said:
Why do use the term “hubcap-stealing”?? Is that acceptable?
Click to expand...

I understand your concern. It’s always difficult to decide whether the hyphen is needed or not. In this case, since “hubcap-stealing” is operating as an adjective for the noun “bastards”, the use of the hyphen is perfect. If we were using “hubcap stealing” as a noun, say, “Them bastards are well known for their hubcap stealing”, then we wouldn’t need the hyphen.

Anyway, cheers for the report. Enjoyed it. Agree with most of it. I’ll likely write the same on Deadbat’s report, but I personally thought Norwood’s was a classy performance. He must have messed a few passes up but I didn’t actually see him misplace anything. I thought maybe it was partly due to a less than dynamic opposition midfield, but thinking about it, you’re probably right that the extra body in midfield minimizes some of the weaknesses in his game.

Matter of opinion
B

I think last night gave hope that Stevens, Norwood, Fleck etc aren't done yet. I'd give them the chance to get back to their previous levels again next season. If they can we don't need the huge rebuild that I'm dreading.

All kicking off again on here

Benben said:
I’m just pointing out that I don’t think some of your comments are at all acceptable.
Click to expand...

Benben said:
Read what the OP said.
Click to expand... 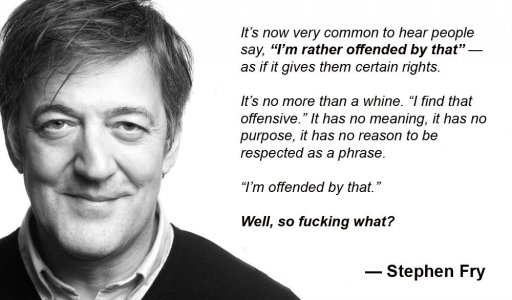 PrestwichBlade said:
Highlight for me was Stevens. So pleased to see him put that performance in. I honestly thought he was done. In general terms, to a man, we were excellent and I can't recall any passes aimlessly given away to the opposition. Well done all.
Click to expand...

Too right. With Jimmy/John, we were always wondering which one would turn up, but we'd kind of given up hope that there was an alternative Stevens available.

Benben said:
Why do use the term “hubcap-stealing”?? Is that acceptable?
Click to expand...

I have to agree that it's a gross generalisation. I once parked in Liverpool and came back to find my car exactly as I'd left it.

Says the man who has repeatedly spoken out against homophobia, despite casting aspersions on victims of child sexual abuse and admitting to being a blatant bully himself.

Fry is a very clever man, but also a reactionary twat who loves to cause a stir and be seen as "the outspoken aristocrat".

I'd take everything he says with a pinch of salt if I were you!

And if these two can get a partnership cement over the next 2-3 months then we SHOULD be motoring. Even though Brewster has showed nothing as yet, there’s surely a good player in there waiting to burst through ??

Well you can't really fault anyone on last nights performance, first game I've enjoyed for a good while. Fair to say we got what many have been crying out for since before Wilder decided to creep away out of the back door. Last night we played a new formation more suited to the players we had available gone was the rigid 3-5-2 which after 10mins always seemed to revert to 5-3-2 under Wilder. Instead we seemed to be switching formation depending whether we had the ball or not at no time did the midfield get overrun like it usually does. When defending we looked to be playing 5-4-1 then we we had the ball we went to a 3-4-3 in effect our usual wing backs adding to midfield when attacking and dropping back to a back five to defend. Same up front Osborn and Didzy dropping into midfield or getting forward with the wing backs to always maintain a midfield four. We always had someone to pass to and looked much better than our usual sideways backwards with the inevitable long punt downfield by Ramsdale. For the first time in a long time we looked like a team. Three good saves by Rammers first half in the second half he was virtually redundant Everton changed shape and personnel but to be honest second half never looked like they would score. Gives us a bit of hope that we might just have a decent season in the Championship on that showing a play off place is the least we should be aiming for. Nice to see us in red & white stripes too rather than the god awful pink or green kits.

Really enjoyed it and agree with the comments. Baldock at the end when he got clattered mouthed to Hecky "I`m not coming off!" summed up the performance.
In a dreary season it was a glimmer of something to be happy about and you know they had a good match when the opposition manager pulls out the "its not that Sheffield United were good its us that were bad" line this is now the benchmark quote in the PL for us stuffing them good and proper.
You must log in or register to reply here.