After seeing fellow promoted side Norwich City come down to earth with a bump the evening before against Liverpool, the Blades travelled to the south coast to take on Bournemouth.

Selling out quickly on the second band of loyalty points, approximately 1325 Blades travelled to get a glimpse of Wilder’s men making their first assault on the top level – the first competitive fixture between the two sides outside of the second, third and fourth tiers.

Hoping to see a more positive result than the Canaries, in a more winnable fixture, Wilder chose to hand only Callum Robinson his competitive debut as five other new signings (I’m not counting Hendo) had to make do with a place on the bench.

The Blades started on the front foot, with barely a minute gone when Lundstram intercepted the ball in midfield before placing a teasing ball over the head of a defender and into the path of McGoldrick. Didzy managed to get a shot away, but saw ex-Blade Ramsdale equal to his effort, clawing away and denying the Blades the perfect start.

The Blades were feeling their way into their first game back but were reminded of the danger the opposition posed… First, space was worked for a wayward shot from distance, before a dangerous looking break from the hosts was aided by what looked like a foul off the ball. Whilst your writer was still remonstrating, the Blades backline snuffed out the danger.

Whilst not at their swashbuckling best, the Blades were looking to get forward and a great passage of play ended with Callum Robinson making himself a yard and having a go from distance. The new boy caught it well, but Ramsdale was down well to push away.

The travelling support were quick to make their thoughts known, as, after clearly stealing 6+ yards from a throw in not long before, yet another Fraser dive bought a free kick for the hosts. 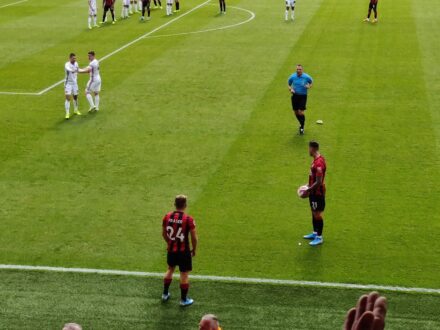 A rare shot of Fraser on his feet

Winning their first corner of the match, United had an opportunity to get bodies in the Bournemouth box, but Fleck’s cross was cleared at the front post as far as Lundstram, who dragged his long range effort wide.

Bournemouth gained a fortunate chance down the other end a short time later, but Egan did just enough to force Mepham to fire wide.

There was just enough time before the interval for Robinson to test Ramsdale once again, forcing a smart stop as the minute of added time ticked away.

Happy with the first half, Wilder made no personnel changes during the break, but the turn around did seem to spark a little bit more freedom amongst the backline to get forward. A notable participant was Enda Stevens who got himself in behind only for a last ditch Mepham tackle to deny a good chance.

The Blades were looking to make their mark and next to get himself beyond the defence was McGoldrick, who fired a first time effort just wide of the far post with Ramsdale beaten.

Lundstram managed to get down the right wing and put a great ball across the penalty area that only just evaded the attentions of Callum Robinson.

Despite the Blades’ positive start to the second half, it was to be their opponents who would break the deadlock. After a great save from a powerful effort from Billing, Henderson worried supporters by going down in pain as VAR reviewed a penalty shout that would never have been given.

VAR confirmed what everyone already knew as Henderson got back to his feet, but sadly it wasn’t in a position to correct yet another Fraser bought free kick. McBurnie was ready to come off the bench to replace McGoldrick, but could only watch on as The Cherries opened the scoring. After a great initial reaction save from Henderson, Mepham was on hand to power home the loose ball on the rebound.

The Blades went down the other end and won a corner, but were frustrated again as a soft free kick was given for Ramsdale coming off his line and brushing the back of Robinson. McBurnie was almost in behind, but a fortunate and key foot from Ake managed to divert the ball away from the striker.

Luke Freeman was next to be introduced to proceedings, replacing Lundstram. John Fleck went into the referees book and survived a VAR review as to whether or not the card should be upgraded to a red.

Stevens was on a mission and appeared to have been given his ‘free roaming’ licence that we came to enjoy last season. As the Blades looked to build momentum, he forced a corner out of Bournemouth which unfortunately resulted in an over hit cross.

In another positive substitution, the gaffer chose to replace Basham with Billy Sharp.

After great work from Fleck, the skipper managed to take the ball past Ramsdale, but as he put his cross in, the linesman flagged to signal that the ball had gone over the line.

With the Blades on the front foot, Luke Freeman won a free kick and unbeknown to them, sarcastic cheers from the Blades’ support was to serve as a warm up for a far more enthusiastic celebration.

Straight from the training ground, rather than swinging in a ball, Norwood found the sprint down the line of Baldock, who fired a low cross through the six yard box. McBurnie attacked the ball, but as his attempts were blocked, the ball dropped to Billy Sharp, who rifled home before sprinting passionately towards the Blades support, some of which who were on their way to meet him through the flailing limbs!

There looked to be just time for a sickener from Bournemouth as a free kick was given right on the edge of the Blades box, absolutely no idea what for, looking forward to trying to find out via replays later on!

Thankfully, Fraser’s shot sailed harmlessly over Henderson’s bar before the referee brought the game to a close, securing the Blades’ first point of the Premier League season and most certainly no less than they deserved.