May 9th 2013 sees Sheffield United and Bramall Lane have the great privilege of playing yet another massive part in the story of true Lane Legend Alan Hodgkinson’s life and career when it hosts the launch of his autobiography.

Written in tandem with author Les Green this is without a doubt the definitive story of a life given over to the beautiful game and what a story it is!

Born in Laughton Common, Hodgy came to the attention of Sheffield United as a youngster playing between the sticks for Worksop Town and a deal was struck that he could join the Bramall Lane outfit for the princely sum of £250 – how many times did he repay that fee down the years?

Part of the legendary defence that generations of Blades were nurtured on the stories of his name is synonymous with both Sheffield United FC and the specialist trade he plied.

The second highest league appearance maker in the club’s history tells its own story, 674 appearances altogether over 17 years also speaks volumes – in fact he missed just 17 games out of a possible 571 in the league.

A key figure in the promotion teams of 1961 and 1971 as well as the FA Cup Semi Final side that arguably should have taken the turf at Wembley v Spurs he also represented his country at U23 level as well as gracing the Football League representative side.

A successful spell on the coaching staff following hanging up his gloves was followed by a spell as part of the management team at Gillingham alongside Gerry Summers before becoming the world’s first specialist goalkeeping coach and mentoring, amongst others, David Seaman and the great Peter Schmeical as well as becoming an integral part of the Scotland Staff- he has never slowed down- the award of the MBE in January 2008 was a
reflection of what he has given to the game down the years.

Be a Part of History

To launch this fantastic book the Blades are hosting “An Evening with Alan Hodgkinson MBE”.

All attending on the night will receive a personally dedicated book from the man himself as part of their package – the doors to the Platinum Suite will open at 7 o’clock – there will be a free pint of house beer/ lager or a soft drink of your choice on arrival – your signature SUFC Home Made Pie, Peas and Gravy will be served at 7.30 prompt to table.

To mark its publication Alan will then take to the stage at 9.00pm for what should prove to be the Q&A to end all led by Club Historian John Garrett and “Between the Sticks” author Les Scott who will also invite questions from the floor.

The licensed bar will be open until late and Alan will be around for a chat as the evening ends!!

The cost for this superb evening is £45 per head including an exclusive, signed copy of “Between the Sticks” – Tables of 10 can be booked for £400 or you may simply come along for the event for £30 per head (a copy of the book is not included in this price) and tickets are booked directly through the Sheffield United Box Office or contact John Garrett on john.garrett@sufc.co.uk – please note – the exclusive personal signed copies will be available only to those attending on the night, so please book early to avoid any disappointment!

Please Note: Dress Code is Smart Casual for this event – Strictly no jeans or trainers. 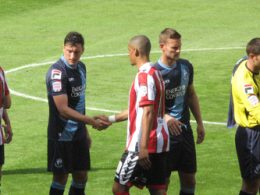 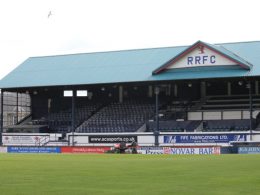 In the last game of their mini-tour of Scotland, David Weir’s Blades side travelled to Stark’s Park –…
byMartin Fox 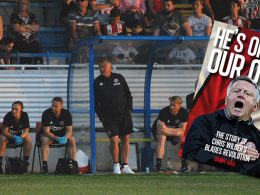