Sheffield United U18’s went into this game looking to build on their impressive victory against Coventry last week, while the hosts Barnsley were looking to make amends after their 5-1 defeat away at Nottingham Forest. The Blades made a few changes to the side that won that game against the Sky Blues, as they introduced a few players who would have been playing in the under 21 fixture at home to Barnsley on Monday afternoon had it not been postponed. Jason Paling, Kyle Scarisbrick and Elliot Ptak all made way for Jordan Hodder, Chris Salt and Tyler Williams. The midfield and attack remained unchanged.

It was Barnsley who kicked the game off, and it was them who had the better of the opening exchanges without creating a clear cut chance. Like United, they weren’t scared to get the ball and pass it around and most of their side looked very assured in possession. They forced two corners in the first 3 minutes of the game, but the first one was punched away well by Willis and the second was headed away comfortably by the Blades defence.

United’s first attempt of the game came through Diego DeGirolamo. Tyler Williams’ throw in was brought down by DeGirolamo, who immediately turned and started to run at the Barnsley midfield and defence. He took the ball past four players before trying to fire a shot across the keeper with his left foot from 20 yards out, the pass would have probably been the better option as Jahmal Smith had some space on the corner of the box as he made his forward run, but the shot went wide.

The home side really started to turn the screw after this, and forced three more corners which unfortunately for them came to nothing again despite their best efforts. The first two were dealt with reasonably comfortably again, but the third forced George Willis into action for the first time. The corner was drilled towards the front post but the flick on was saved very well by the England under 17 stopper and he did well to push the ball away from goal so the defence could clear the danger.

Barnsley’s left winger was causing United all sorts of problems with his pace throughout the first half, and it was he who had the best chance of the half for the home side. Josh Williams was just out-muscled on halfway and this led to a 3 on 2 break for the home side, the pass found it’s way to the winger on the back post, but he put the ball wide from the edge of the 18 yard box when he really should have done better. This was a big warning for United and it was a very lucky escape.

The warning was definitely taken on board by the young Blades, and they had a much better spell after that miss. After good passing play between Heather and Smith, the ball was squared to Whiteman who tried his luck from distance. It was a good low shot on a slippery surface but the keeper got down well to his right and held on to keep the scores level at 0-0 with half an hour gone.

After that, United had two great chances to take the lead but were unlucky not to take advantage. DeGirolamo dropped deep to collect the ball, played a well weighted pass for Smith who outpaced the defender to get to the ball first and touch the ball past the keeper who did just enough to put him off his stride, allowing the centre half to get back in behind and block Smith’s shot and clear the danger. The next opportunity came for Owen Heather, as Pemberton’s delightful pass over the defence was perfectly weighted and Heather hit a deft side footed volley past the keeper and was so unfortunate to see the ball bounce off the post and land safely.

The game would stay 0-0 until half time, but for the best efforts of the home side. Barnsley’s number 10 went on a mazy run across the edge of United’s area, taking on 3 players before attempting an audacious lob back across Willis from 20 yards out, but it was never in danger of going in and cleared the bar by a good 2 or 3 yards. The next chance was much better, as the number 9 broke the offside to latch onto a loose ball, but Willis did very well as he rushed to the edge of the box and dived at his feet, forcing the striker to lift it over him only to see his effort go harmlessly wide.

Sheffield United started the second half after what seemed a pretty animated team talk from John Pemberton and immediately looked a lot better than they did the first half. DeGirolamo pressed the defence well and caused a mix up between two Barnsley defenders to the right of the penalty area. He got the ball, cut inside the box and hit a great low shot that deserved a goal, but the keeper saved brilliantly low down again.

Shortly after, it was a free kick from out wide on the left that led to first goal of the game. Otis Khan jogged over from the right to take it, and his wicked in-swinging cross was met at the front post by JOSH WILLIAMS, who’s bullet header went flying into the bottom corner leaving the keeper with absolutely no chance and giving the away side the lead in the 52nd minute.

In what was a quiet second half in terms of chances, it was Barnsley who got a slight upper hand after the goal as they pushed for an equaliser. A ball over the top of the Blades defence caused plenty of problems, but Salt somehow managed to get to the ball with a great last ditch slide tackle just before two much quicker Barnsley forwards could get on the end of it and surely level the game. It really was an excellent piece of defending by the centre half.

It was the home side with another great chance a few minutes later. Some quick passing in midfield created a bit of space for the number 8, who threaded a beautiful pass in-between Heather and Williams, and the ball across the six yard box looked perfect for the striker to convert, but Jordan Hodder managed to get back and do just enough to make the striker mis-kick his shot and put it wide of the post. It was another lucky escape for the Blades.

This led to a double substitution for the visitors after 70 minutes, as Connor Dimaio and Elliot Ptak were introduced in place of Ben Whiteman and Diego DeGirolamo. This meant a slight tactical change down the left hand side, with Elliot Ptak going to left back, Tyler Williams being pushed forward to the left hand side of midfield and Owen Heather moved up front.

This change paid off almost immediately. Jahmal Smith won the ball on the right hand side, and delivered an inch perfect cross for TYLER WILLIAMS to tap in with his left from 5 yards out and give the visitors a 2-0 lead after 72 minutes of play, and surely another victory at the start of the campaign. This led to another tactical change from the Blades manager, as United reverted to a 4-5-1 formation to see the game out with Otis Khan moving infield and Owen Heather going to the right hand side.

Barnsley had another good chance of their own with around 7 minutes to go, as a ball played in behind the defence again saw a Barnsley striker latch onto the ball on the edge of the box, but he fired wide as Willis came out and Hodder challenged to try and block the shot. Strangely, the referee saw this as a corner as Hodder’s attempted block saw him upend the striker after the shot had been hit. This left the home side absolutely furious with the referee as they felt it should have been a penalty kick.

The home side would have been even more aggrieved shortly after. The corner that was given led to a United break, and an attempted back pass by the defender went horribly wrong. The ball was head height for the keeper but going wide of the net, and the keeper tried to keep it in but headed it straight to JAHMAL SMITH, who took a touch to compose himself before calmly slotting the ball under the keeper to give the visitors a massive 3-0 lead after 85 minutes.

The Blades made another change at the next break in play, with the excellent Tyler Williams being replaced by Jake Eyre on the left wing.

The home side were clearly unhappy at being 3-0 down on their own ground, and the tackles really started to fly in at this point. This didn’t seem to affect United though and they responded with a couple of strong tackles too – Chris Salt in particular went flying into a challenge and won the ball excellently.

There was little else left in the game now, other than an audacious effort from Pemberton that went flying over the bar from 30 yards, and a curling effort from 20 yards out by Otis Khan that went over the bar too, after good work from the impressive Smith. This would be the last effort of the game as the referee blew his whistle for full time, giving United’s youngsters a 3-0 win in their first away game of the season. The scoreline was flattering, but United’s second half performance was very strong and showed that they’re going to be a big threat to any side in the division this year. 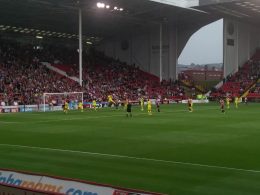 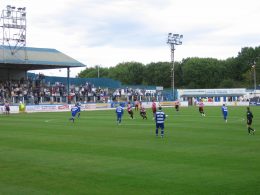 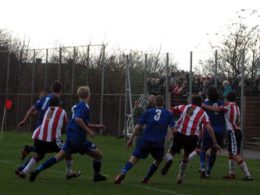 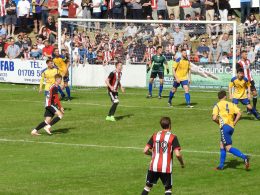