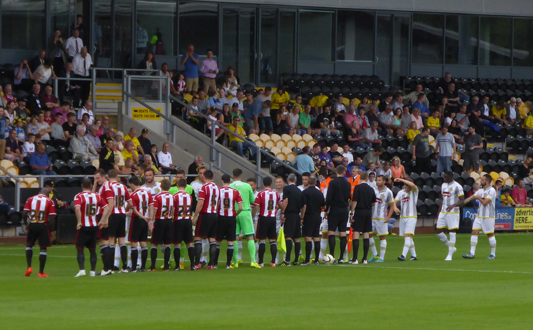 The Sheffield United first team kicked off their pre-season with a defeat nearly as heavy as the rainfall, seeing Burton Albion comfortably retain the Bass Charity Vase.

Speaking before the game of giving everyone some time on the pitch, it was expected that Nigel Clough would either be playing a different XI for 45 minutes each, or at the very least, making a large number of substitutions at half time.

Shortly after the hosts got the game under way, the rain started again with both sides trading possession as they looked to settle into the game.

Andy Butler cut out a cross as the Brewers looked to create a first real chance of the game, before Chris Porter looked to pounce on a loose ball at the other end. Unfortunately for the Blades striker, Burton keeper Anyon just managed to beat him to the ball and collect safely under pressure.

The home side broke the deadlock after only around five minutes, as MacDonald, left unmarked at the back post,  side-footed Akins’ cross past a helpless Mark Howard.

After a couple of brief forays forward, the home side cleared a Campbell-Ryce cross and broke forward quickly. After galloping down their left-hand side, Beaven picked out Akins in the middle of the box, who made no mistake with his shot.

After a short break while Chris Porter received treatment, the Brewers had a good opportunity to make it three.

Rushing out of his box to attempt to head the ball clear, Mark Howard was beaten in the air by Beaven and left stranded. As the ball came into the box, Andy Butler was on hand to save the keeper’s blushes with a slide tackle just as Knowles looked to shoot.

Having struggled to put together many convincing passages of play, the Blades started to use the ball a little better.

Davies played a lovely ball down the right for Campbell-Ryce, who ran onto the ball and knocked in a decent cross, only to see the Burton defender clear. Jamie Murphy powered forward and tried to find the winger again shortly after, but his pass was too heavy and ran out for a goal kick.

A good move starting on the right involved a number of United midfielders, Connor Dimaio with the eventual shot which went wide.

Next to try his luck was captain Michael Doyle, who blasted over the bar after Porter, Reed and Dimaio had caused trouble in the box, forcing Burton to hack the ball towards the midfielder.

Campbell-Ryce and Davies linked up again, playing a neat one-two before Davies went to ground in the area under the challenge of a couple of defenders. The referee allowed play to continue and awarded a free-kick the other way as Davies tried to retrieve the ball.

The referee had moments earlier also ignored a penalty shout from the home side, which had the Blades holding their breath.

A Callum McFadzean corner found Knowles unmarked in the Blades box, with the Burton man heading solidly past Howard to send the Blades in at the break 3-0 down.

Changing the entire eleven at half time, Clough gave debuts to Alcock, McGahey, Basham and Crawford.

As the second half got under way, it became clear fairly quickly that the second half eleven were looking sharper and hungrier than the side that had just finished the first 45 minutes.

A svelte Jose Baxter set the tone with a dedicated sprint after a loose ball moments into the half, stopping the ball going behind for a goal kick and winning a throw in high up the pitch.

Diego De Girolamo turned his man and went on a strong run into the box before being crowded out by defenders before he could get a shot off.

Jose Baxter had an effort from just outside the box which skimmed over the bar for a corner. Baxter sent in a decent enough ball, but it was cleared by the Burton defence.

De Girolamo was next to try his luck from outside the box, but his curling effort went just over the bar, as the sky continued darkened.

Triallist Robbie Crawford came down the right wing and delivered a tempting cross into the box, but De Girolamo just couldn’t get his head to the ball.

On 70 minutes, De Girolamo darted into the box and went to floor as the defenders closed on him, the referee rightly waved away the claims, the youngster having received minimal contact.

Looking sharp and eager to impress, Craig Alcock played a cross-field ball to Harris, who headed down for Scougall. The scot moved into the area and was denied by the legs of the keeper.

Alcock was provider again shortly after, sending a deep cross onto the head of Maguire, who was frustrated to see his header hooked out for a corner by a defender on the goal line.

De Girolamo tried to create himself a chance, flicking over the head of a defender, but the keeper was out quickly to beat him to the ball.

Despite the second half improvement from the Blades, Burton managed to extend their lead in the closing stages with Harness causing trouble down the right before Cutajar half-volleyed past Long, who had already committed and could only get a hand to the ball.

Bob Harris managed to create some space down the left and hit a driven ball across the 6 yard box, but unfortunately nobody could get a touch.

It was almost a mirror image from the other side shortly after as Crawford played a good ball across the box, just evading the slide of Basham.

De Girolamo teed up the ball for Baxter, who shot from 18 yards but saw his effort end up with the Blades in the terrace behind the goal.

De Girolamo then had a go from 20 yards himself, the ball fizzing just wide as the thunder and lightening set in. 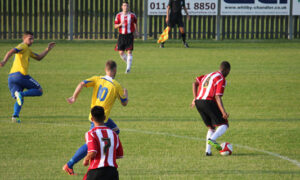 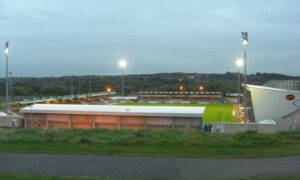