It was recently announced that the the official professional ball of the English Football League for the coming 2017/18 season would be the Mitre Delta Hyperseam. The cynical football fan would be forgiven for skipping over the press release, in a modern football world full of branding, relentless advertising, sponsorship and forever redesigned corporate logos.

The Mitre brand however, is one that for some, invokes memories of a simpler time, a time when as a child you unwrapped the obviously shaped present under the tree, sniffed in that unmistakable newly manufactured aroma and couldn’t wait to rush off with your mates to have a kick about until dark. The early nineties saw the introduction of the synthetic football, rather than the previous leather efforts.

My first proper ball of this description, was the Mitre Pro Max, which had the title of the official ball of the newly launched Premier League, back in 1992 when Brian Deane so famously scored the first ever Premier League goal at Bramall Lane:

Mitre as a sportswear and equipment manufacturer, go back over 200 years, having been established up the road in Huddersfield in 1817. Since beginning to manufacture footballs, Mitre have had a presence throughout football associations and competitions worldwide, being the ball of many a famous cup final.

The resurrected and redesigned Delta, has a nod back to the familiar designs of the past. Reminding me of the long lost/worn out Pro-Max and it’s successors, the classic Delta mark and design re-appears for the first time since 2001.

In a fit of nostalgia, and perhaps with a smidgen of football withdrawal after such a good season for the Blades, we got hold of the professional version of the new ball to put it through it’s paces.

The design clearly has a nod to the balls of yesteryear (the “#legendreturns” confirms that), whilst having a little too much blue for our liking, is visually pleasing and does maintain good visibility in use – would be interested to see the yellow, winter weather version. The least impressive element of the design is one beyond Mitre’s control, being the recently re-designed EFL logo.

Far from the days of the “casey” and feeling like you were heading or kicking a bag of concrete every time it rained, the description of a modern day ball sounds more like a glossy corporate presentation, but does it all actually mean anything? (don’t worry, we’ll not go through each term, we’re just picking out a few relevant claims!)

Embossed surface, manipulating airflow, providing reduced drag and turbulence, a pure in-flight path and more stability at speeds of 35-40mph. – I’ll leave the stats and claims to the geeks and goalkeepers embarrassed by long range efforts in the coming tournaments, but it certainly sounds like it makes sense. The ball is covered in tiny dimples and interestingly placed grooves which make the ball quite tactile and despite the new ball looking shiny and glossy, offer a bit of a key, giving a feeling of grip and control. It doesn’t feel like the new ball needs “wearing in” which is the impression you get with some. You can get a good connection with the ball, hit it accurately over distance and also, get some whip/bend on it where required.

Versatile microfibre synthetic leather outer, provides consistency throughout the whole season – with every kick. The tough material resists abrasion and remains sturdy, making this a player’s dream. – It’s very early for us to give an honest opinion on this one. The ball is only just on the market and whilst we’ve used it multiple times on both grass (which it’s intended for) and 3G without any adverse effects on the ball, we’ll perhaps come back to this paragraph over the coming months. The ball looks and feels quality, but then it should for an RRP of £115!

Revolutionary and innovative technology – Hyperseam – delivers the benefits of both a stitched and bonded ball. Engineered to deliver superb speed, pin-point accuracy and increased power – but with the addition of bonded benefits. From superior durability to almost zero water uptake, Hyperseam is for use at the height of professional football – Not just any seams, but Hyperseam!… We’d love to point out that the speed, accuracy and increased power really helped us live up to our superior technical ability, but nobody would believe that! The glowing reference we will give, is that, whether placebo of a new and professional standard ball or not, it felt like the ball performed naturally and as it should, without hindrance. This isn’t always easy to say, how many of us *haven’t* unconvincingly blamed the quality of a ball for a wild volley over the bar or an inexplicable slice out of play? We did briefly use the ball in rainy conditions (May/June showers!) and it didn’t feel significantly heavier or like it was overly effected by the water. Sure, it skidded more off the surface than when dry, but other than the usual pleasantries and splashing, it at least didn’t feel like you were heading a bag of bricks. 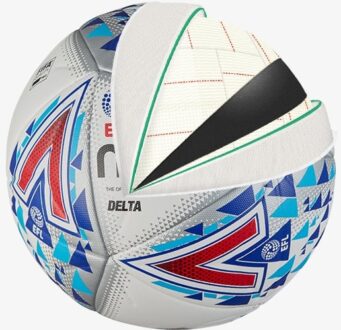 Crafted with dual Hyperfoam lining – ensuring maximum power in every strike. A soft-feel and cushioned touch increases player control and confidence on the ball – without compromising power. Designed for incredible speed – giving fans more top-corner belters throughout the season. – The ball, as we find with most “professional” grade footballs these days, does feel softer and more pleasant in use than the cheaper replicas. It does feel like less of a chore or physical trauma to hit with power and just feels a lot more comfortable in hand and at your feet. It feels easier to get a true connection with the ball. We swapped over with a replica grade ball from another popular manufacturer which we normally use for weekend 5-a-sides and whilst it was also an older, more worn ball, the contrast in comfort was stark.

In conclusion, whilst sounding a lot like the marketing team had a good few Friday afternoons thinking of new trademarks and terms, there is merit behind the claims. We’re at pains to point out that a professional grade ball should be quality and certainly at the modern day price point, but we were impressed with the ball.

This grade is far in excess of the reach of the aforementioned primary school child emulating his or her heroes, but if the replica and other grades of the Delta live up to their professional cousin, we’d have no hesitation recommending them.

We managed to stick a few in the top corner with regularity as well as relative success in a cross-bar challenge, so it must have something about it, even if it can’t work miracles!

More than anything, we’re looking forward to seeing what Chris Wilder’s men can do with it in a couple of months, as we look to make progress back in the Championship.

For more information on the Mitre Delta ball, visit https://www.mitre.com/delta