After a twelve year absence, Bramall Lane was long overdue a return of Premier League football, Crystal Palace were to be the opponents, arriving on the back of a good record away from home last season.

Eager to see the top-flight Blades, the majority of a crowd of 30,197 were keen to see the upgrades the club had made over the summer, with the eyes of Sky Sports, England manager Gareth Southgate and various other media outlets focused on the Sunday afternoon kick off.

Happy with the start on the road at Bournemouth a week earlier, Chris Wilder named an unchanged side, the first time a manager has named a fully British/Irish starting eleven twice in a row in the Premier League since 2012.

The Blades were made to kick towards the Shoreham end first half and other than a half chance for Benteke in the opening stages, the Blades started positively. Whist still complaining about what appeared to be a push in the area in front of the Kop, a shout went up as the visitors appeared to block a Stevens effort with an arm. The referee didn’t bite and a subsequent VAR review going on in the background apparently cleared any wrongdoing. There was no public communication that this was happening and in any case, the Shoreham boys made their thoughts known with a chorus of ‘VAR, is fucking shit’. 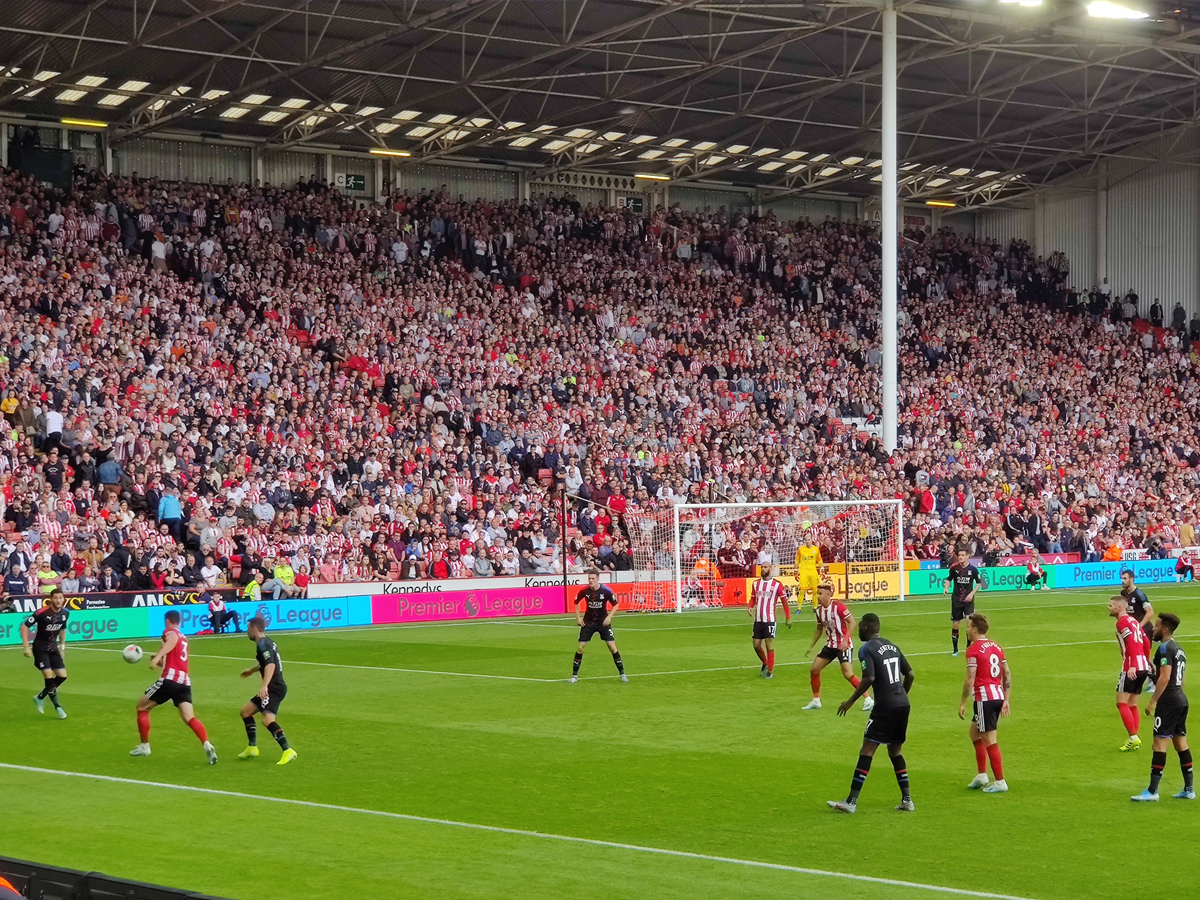 Attacking the Kop, the Blades were eager to create something and tried a familiar corner routine, playing a low ball to the run of O’Connell who turned it goalwards, only to see his effort blocked and eventually cleared.

With just under half an hour played and a positive start, Wilder was forced to make his first change of the game, when after a snatched shot over the bar, Fleck returned to the edge of the centre circle before laying on the floor requiring physio treatment. He wouldn’t continue and walked gingerly off the pitch to be replaced by Luke Freeman.

The substitute was involved in creating his first chance shortly after, as the Blades hit the visitors on the break. Freeman found the run of Robinson who took a touch and snatched a shot from the edge of the area, which was off target. Down the other end, the visitors bought a soft free kick, but the wall remained strong and blocked the shot.

The best chance of the first half was created not long after, with Lundstram robbing the ball from Van Aanholt high up the pitch before putting a teasing ball across the six yard box. McGoldrick met the ball at the back post, but saw his effort from point blank range hit the Palace keeper with Blades supporters on all four sides of the ground poised to celebrate.

As three minutes were added at the end of the half, the battle you never realised you wanted to see until it threatened to happen was hinted at, as Wilfred Zaha and Chris Wilder squared up in front of the Blades bench. Like that particular match up, the half finished with neither side having made the initial blow as the teams headed to the changing rooms at a stalemate.

There wasn’t long to wait however, as just a few minutes after the break, the deadlock was broken…

Jack O’Connell set off down the left and played to Stevens, who in turn found Freeman who powered into the area, past his man and shot across the keeper. The keeper pushed away, the rebound narrowly avoiding the attentions of Robinson, before John Lundstram arrived to calmly sweep the ball into the back of the net. A great display of positional rotation and effective in showing the league to just the kind of approach to traditional defenders roles Chris Wilder and the team take.

Townsend managed a long range effort down the other end, but Henderson was on hand, pushing away as he was forced into some rare action diving to his right.

The busy Callum Robinson went to the floor on half way and after some physio treatment walked off to be replaced by Oli McBurnie, in the second enforced substitution. 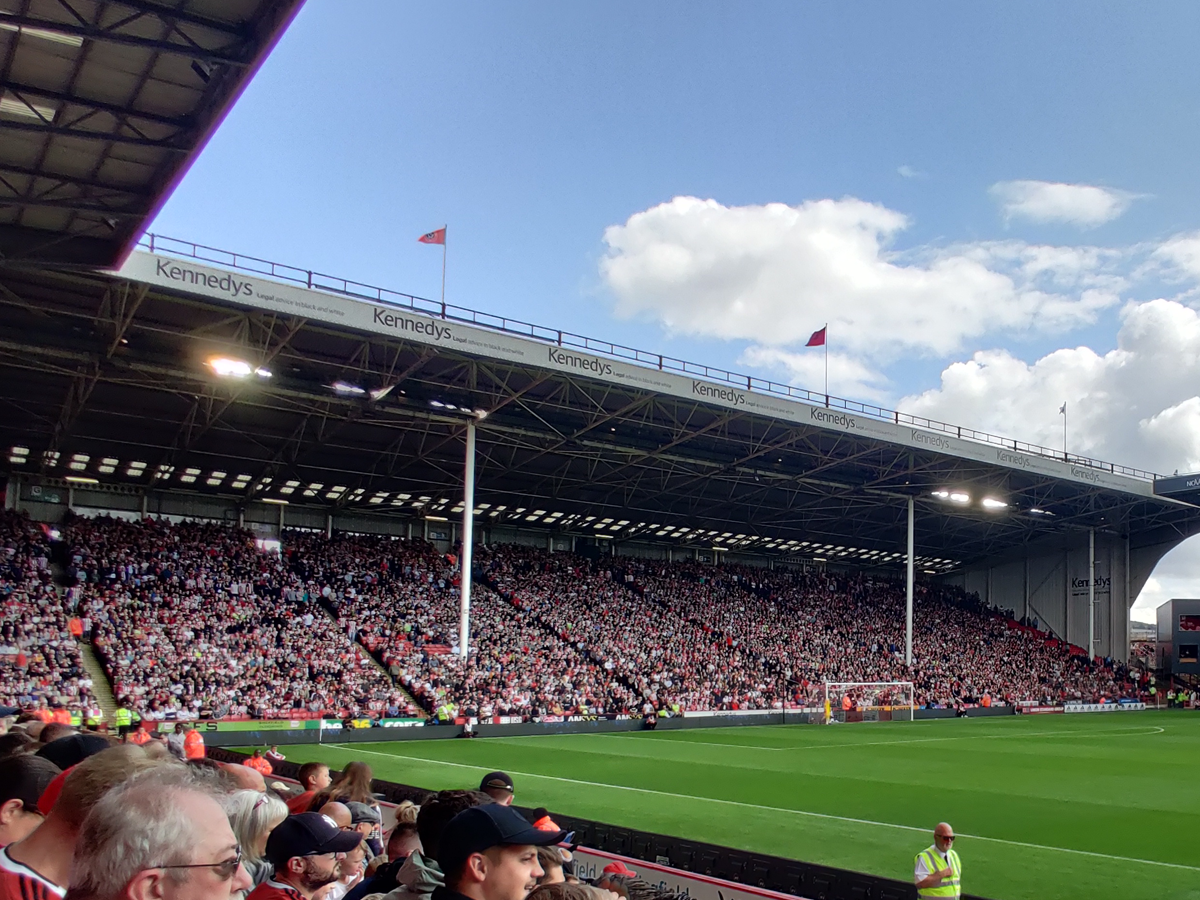 An absolute peach of a cross-field ball from Norwood found the advanced run of Baldock, but as the full back was forced to hold up for reinforcements to arrive towards the area, his opponents recovered and blocked his eventual cross.

After the visiting keeper punched away a Norwood corner, Chris Basham floated a deep ball in to the back post where Jack O’Connell was on hand to head downwards, it was a decent chance, but the keeper managed to turn behind at his front post.

McBurnie was making a nuisance of himself and the Palace backline could consider themselves somewhat fortunate with the bounce of the ball with the big striker pressing intently and managing to get some blocks in and cause trouble. Baldock similarly looked to press high, but an attempted block gained an angry reaction as McCarthy didn’t appreciate his attentions, resulting in both Baldock and his opponent being booked.

The Blades had a swagger and a couple of players managed a few pieces of showboating as the visiting side looked a spent force, Hodgson having already resorted to switching to attempting to play it long to Wickham. 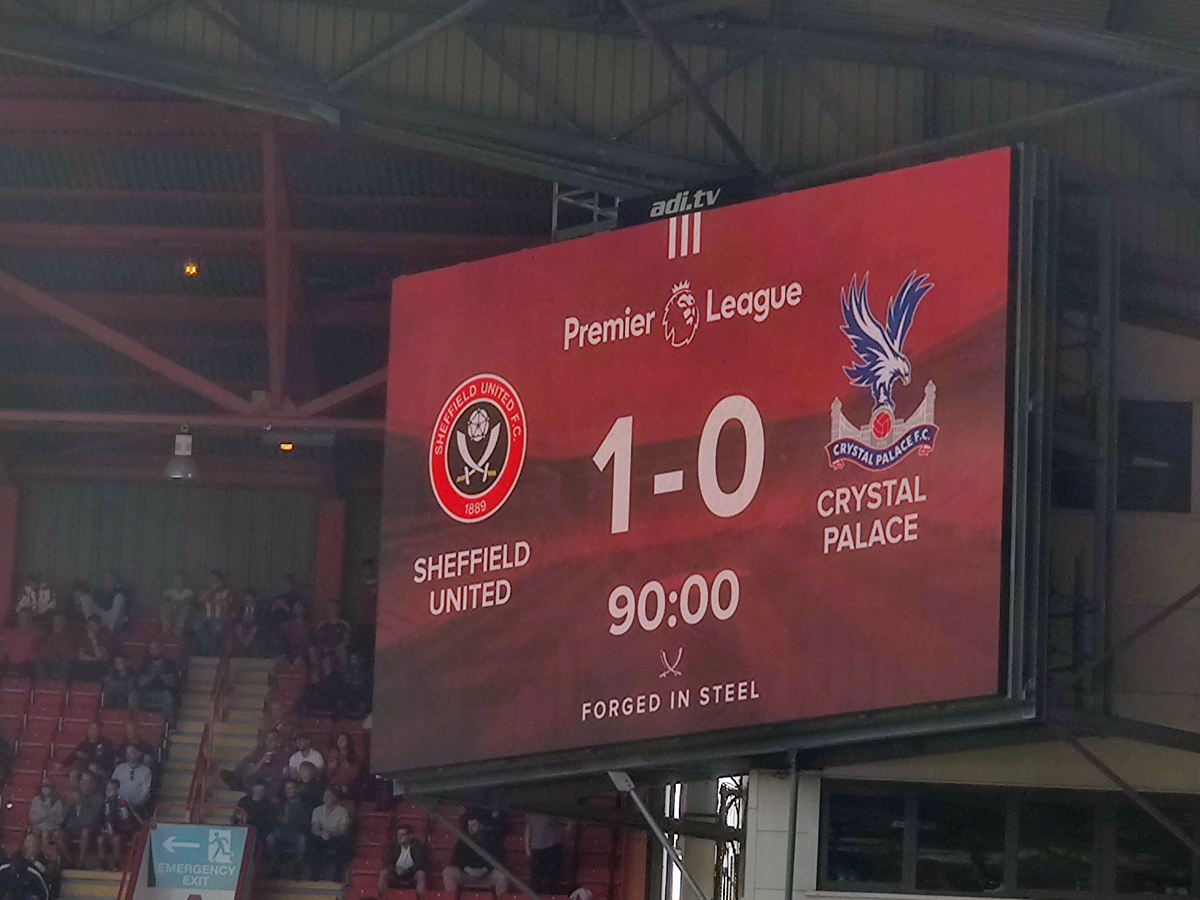 Chris Wilder took the opportunity to introduce Phil Jagielka, as the clock ticked down, with the referee frustrating the home crowd somehow finding 7 minutes to add on. The Blades continued to play out the time sensibly, admittedly dropping deeper but simply soaking up the limited attempts at creating something from the visitors and playing into the corners when winning the ball back.

The referee finally blew the whistle signalling the Blades’ first win back in the top flight, no less than they deserved.