In front of 309 (plus 2 dogs and S2 Jnr in a baby sling) spectators, it was proven that contrary to all known evidence, it is possible for Jake Wright (Snr) to be on the losing side after 90 minutes of football.

Attacking the open cricket pitch end first half, it was the Blades who had the ball in the back of the net first, after Regan Slater’s long range effort was blocked. Unfortunately, Jake Wright (Jnr)’s effort was ruled out after the linesman spotted a push. 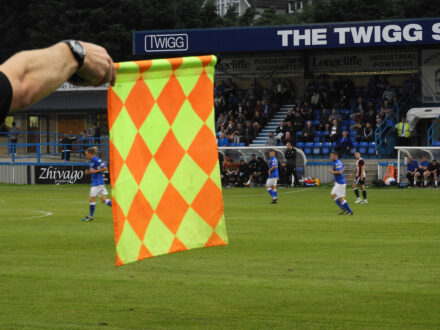 Minutes later the young striker was involved again as Lavery got to the byline and played a great ball across the six yard box. Wright threw himself towards it, but agonisingly couldn’t quite get a touch.

Another chance was created soon after and Bennett saw his far post knock bounce back off the post.

Ex-Blades keeper Phil Barnes was a familiar sight and he was next to frustrate the Blades with a fantastic double save, first from the shot of Lavery and then the follow up effort of Slater.

Matlock Town came further into the game as the half ticked on and it was the hosts who would open the scoring, Marc Newsham on hand to nod past Jake Eastwood at the front post. Matlock could have doubled their lead when clean through on goal, a striker wasted the one-on-one and put wide.

Jake Wright (Jnr) had required the physio just before half time and was substituted at the break, replaced by Gilmour. This also signalled a switch to three at the back with Graham, Wright and Wallace (K) charged with keeping the hosts out. 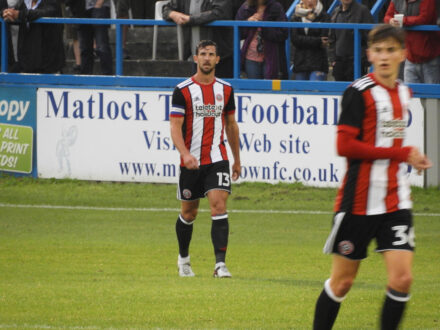 Sam Graham looked to get involved at the other end, getting his head on a corner, only to see his effort sail over the crossbar.

Other than a couple of shots from distance from David Brooks, the Blades weren’t looking likely to threaten and Knill shuffled the pack a little with Lavery and Brooks replaced by Smith and Hallam.

The Blades were handed the lifeline of a penalty, when a dangerous run in behind panicked the hosts, with Nathan Thomas stepping up to dispatch the penalty into the bottom corner.

This goal sparked a small flurry from United, who sensed the comeback, albeit late, may be on.

The hosts repelled a series of corners and a Jordan Hallam effort was well saved, with the Blades XI running out of time for an equaliser.