With memories of a fantastic championship winning season still strong in the minds of Blades fans everywhere, the summer has perhaps been an unwanted break with many just wanting the games to keep coming thick and fast.

Those desperate for a return of their football fix don’t have much longer to wait though, Chris Wilder’s squad are now back in training and following a summer of celebrations are putting in the hard yards ahead of what promises to be a challenging 2017/2018 season in the second tier.

With fresh faces through the door already in Ched Evans, Nathan Thomas, Enda Stevens and George Baldock [UPDATE: and now Richard Stearman!], supporters will be itching to see the lads in action once again.

United will again have a warm weather training camp in Spain, with an open training session and fixture against Málaga CF on offer for those willing to travel further afield, or indeed the Blades fans exiled in the sun.

Find out where you can catch up with the Blades first team with our quick guide to the pre-season (see the thread on our forum for Academy and XI friendlies):

A familiar trip and indeed where Chris Wilder started last year’s preparations, the Blades take on the Steels in a fixture which they won in resounding fashion twelve months ago.

Goals from Matty Done (2), Marc McNulty (2) and Che Adams ensured that the gaffer got off to a winning start in a game played by two completely different Blades XI’s – Click here for details, images and a match report from this fixture.

Turnstiles will open around 12:30, with the ground having been restricted to a capacity of 2000.

A familiar location to many Blades, Bracken Moor is a cracking place to take in a game of pre-season football. With a Sports Club on site for ales and soft drinks with a good view of the ptich and “Angela’s Kitchen” for hot and cold food, fans are well catered for and usually get a warm welcome.

The main stand, now named after Jamie Vardy, has undergone a degree of renovation this summer and the terracing towards the Bracken Moor Lane End and behind the goal is always popular.

Parking: Some street parking and an official car park across from the entrance at £2

As part of their warm weather preparations, United have been invited to play Málaga at a regional stadium in Coin by the club and local authorities.

The Blades will also be having an open training session the day before this fixture, at the Marbella Football Centre – http://marbellafootballcenter.com, starting at 10am local time.

United will continue their pre-season with a short trip up the road to the Proact to take on relegated neighbours Chesterfield.

Now under Gary Caldwell following the departure of ex-Blades boss Danny Wilson in January, the Spireites will be hoping for a swift return to League One after a difficult season and turbulent time off the pitch.

This match is ALL TICKET for Blades Supporters.

Having been initially allocated 1,976 tickets, a further allocation may be available if required. Tickets are priced as follows:

Ambulant disabled tickets can be purchased at the age appropriate price, a free personal assistant ticket can be provided if necessary.

8 pairs of wheelchair/helper tickets are available at the age appropriate price.

Opened in 2010 as a replacement to Saltergate, the Proact (previously B2Net) is situated on the former site of Dema Gasworks and holds a capacity of approximately 10,500.

Visiting fans are normally housed in the North Stand (currently named the “Rubicon Print” stand), which holds up to 2088 supporters.

Should be an easy one for Blades fans this! just head down the Dronfield Bypass and turn right after Tesco.

In the second local game within the space of three days, the Blades will head to Rotherham to take on another side reeling from a disappointing 2016/17 season. Relegated to League One under the caretaker charge of now permanent manager Paul Warne, the Millers managed just five wins last season, all of which were at home.

This match is ALL TICKET for Blades supporters and we have been allocated 3,200 tickets.

Ambulant disabled tickets can be purchased at £8 (Higher Rate DLA/Enhanced PIP), a free personal assistant ticket can be provided if necessary.

17 pairs of wheelchair/helper tickets are available at £8 for the pair.

Visually impaired supporters are advised to contact Rotherham United directly on 0844 414 0754 (after purchasing tickets) to order a commentary set.

Almost a year later and to the amusement of some people, the club officially named the stadium the “New York Stadium”. Depending on who you speak to, the name originates from the iconic fire hydrants that the Guest and Chrimes factory once exported to the USA or simply that the area of Rotherham the ground is located in has always been referred to as “New York”.

The Blades were one of the first visiting sides to play at the New York Stadium, playing a pre-season friendly there in 2012.

Another short journey, the New York Stadium is situated within walking distance of the Railway Station and Bus Interchange.

Car parking at the stadium is for permit holders only.There are a number of pay & display car parks located around the town centre,  including a multi storey car park located next to the Interchange. Otherwise there is limited street parking available towards the town centre side of the ground. Those happy to walk a little further will find street parking near the old Millmoor ground, which is around a 10/15 minute walk away from the visitors turnstiles.

In the only home game of the pre-season program, United will host Premier League side Stoke City at Bramall Lane.

Mark Hughes brings the Potters to the Lane for the first time in almost a decade, the visitors being 3-0 winners last time out with goals from Richard Cresswell, Ryan Shawcross and a rare James Beattie own goal all within the opening twenty minutes of the game.

Prior to this friendly fixture, Blades co-owner Kevin McCabe and Stoke City chairman Peter Coates have agreed to donate £1 from every match ticket sold to the recently set up UK Solidarity Fund. Administered by the Red Cross, funds raised will go to people and families affected by terrorist attacks in the UK, such as recent incidents in Manchester and London.

The John Street and South Stand will be open for this game with tickets priced as follows:

Chris Wilder’s side make a trip south to round up their pre-season friendlies with a trip to Hampshire and the home of Eastleigh FC, the Silverlake Stadium.

The Vanarama National League side will have a few familiar faces in the squad with ex-Blades academy player Ryan Cresswell teammates with ex-Wednesday Reda Johnson and new signing ex-Blades winger Mark Yeates.

This fixture is pay on the day for Blades fans or alternatively, tickets can be purchased online in an unsegregated stand via Eastleigh FC.

Tickets are priced as follows:

For Blades fans looking to attend the fixture and make a weekend of it, the club are hosting a Beer Festival on the Saturday and Sunday, to which Blades fans will be welcomed. 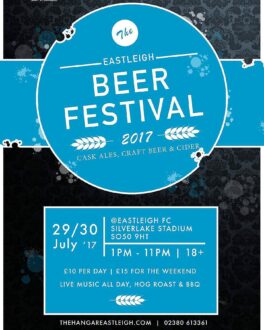 Eastleigh Football Club have played at the Silverlake Stadium since 1957.

Having a capacity of 5,192, the ground’s record attendance is 3,191 for a friendly match against Southampton in July 2007, whilst the record for a league match was 2,283, which was set on 28 March 2009, against AFC Wimbledon. Both these figures were overtaken on 28th February 2015 when 4,126 people attended the Eastleigh v Macclesfield Town Vanarama Conference fixture.

The ground is located at the following address:

There are a small number of parking spaces available on a match day, the club therefore recommend parking at Stoneham Park (opposite the Concord Club) where the site owners may charge a small fee.

The nearest train stations to the Silverlake are Eastleigh or Southampton Airport Parkway, both of which are about a 20 minute walk away from the ground.