Nigel Adkins’ Blades kicked off their pre-season with a victory over non-league Ilkeston FC on Saturday, with the new gaffer casting his eye over a large proportion of the squad during his first 90 minutes on the touchline.

Playing a different eleven per half, United came out on top as 1278 looked on at The New Manor Ground.

The hosts got the game under way and the Blades almost had the perfect start. After a Campbell-Ryce cross was blocked for a corner less than two minutes in, Bob Harris sent in the set piece which was met by the head of Michael Higdon. The big striker nodded towards goal only to see his header cleared off the line by an Ilkeston defender.

The Robins went down the other end and had a big shout for handball as Howard rushed to the edge of his area to collect the ball. It looked like they had a case, but the referee wasn’t so sure. Higdon was involved again in the next Blades attack, with the defender just doing enough to ensure he headed off target from a McNulty cross.

United were having plenty of opportunity to practice set pieces, a number of corners were taken by the Blades, but the majority were too deep to trouble the hosts.

Marc McNulty beat three men to get in behind the defence, but the Robins keeper Rachoni saved well. The striker had another go after a neat turn and shot from the edge of the box, the keeper once again confidently parried away, just out of reach of Higdon.

Higdon was frustrated yet again shortly after his diving header from a near-post Harris corner was cleared off the line by Burrows. The Blades were starting to look more dangerous from corners, first Basham’s downward header hit the side netting before both Wallace and Higdon has unsuccessful attempts.

Anything that did come the other way was being dealt with effectively by Collins and captain McEveley.

Unable to break the deadlock, despite having the majority of possession, the sides went into half time goal less with the first half team taking the time to applaud the fans as they left the field.

Adkins took the opportunity to take a look at a completely different side in the second half, with Long, Dimaio, McGahey (c), Wallace K, McFadzean, Scougall, Baxter, Cuvelier, Adams, Calvert Lewin and DeGirolamo coming out after the break.

The Blades again showed attacking intent from the off, first DeGirolamo won a free kick which came to nothing, before great build up play resulted in Dimaio’s cross going behind for a goal kick.

DeGirolamo put the lively ex-Ilkeston man Che Adams through on goal but Rachoni managed to save with his legs, much to the frustration of the youngster, who felt he should have scored.

Flo Cuvelier whipped in a dangerous free kick which was headed clear by the hosts, before sending in a dipping shot which was unfortunately too close to the keeper.

Adams tried his luck again, with a low shot which was fairly routine for the Ilkeston stopper, before being played in again by Calvert-Lewin, this time the cut back was diverted behind for a corner. The Blades were getting into decent positions, but with nobody gambling, good crosses were going to waste.

With their best chance of the game, Ilkeston should have opened the scoring, with their trialist centre-half heading a corner just wide of George Long’s post.

Che Adams was his usual energetic self and had another couple of opportunities to score against his old team, first he placed wide with the keeper closing him down.

Louis Reed replaced Cuvelier who looked to have taken a knock and immediately looked to make an impact on the game. Reed sent a great ball towards Calvert-Lewin, who nodded down for Adams. Adams showed great technique to fire a volley goalwards, only to be frustrated once again by the Brazilian keeper.

As the game headed into the last five minutes, with time seemingly running out, Keiran Wallace brought the ball out from the back and played to DeGirolamo who couldn’t get the ball under control. The loose ball fell to Che Adams, who played the ball towards the six yard box with Calvert-Lewin on hand to bravely poke home under the attentions of the Ilkeston keeper. The Blades continued to attack in the closing minutes, but could only muster a difficult volley from Scougall before the referee blew the full time whistle. 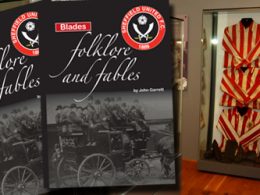 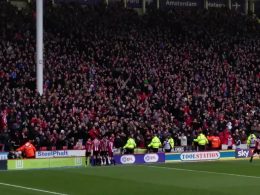 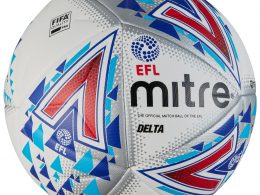 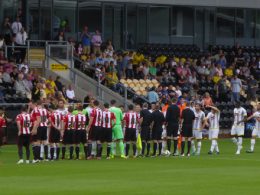