The Bear said:
Hitler was a decent fellow by all accounts. Just a complete bastard in the workplace.
Click to expand... 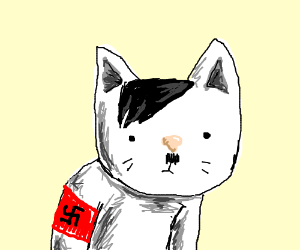 SheepdipBlade said:
The Daily Mail? The paper that thought Hitler was a jolly decent fellow - why would you give any weight to what they have to say about anything?

I don't read the DM, but not sure you can condemn the modern publication in response to an editorial slant back in the 1930s!

Location
Where the Wild Things Play

Surrey Blade said:
I don't read the DM, but not sure you can condemn the modern publication in response to an editorial slant back in the 1930s!

Pfft, don't see why not. I've still not forgiven Gil Reese for missing that sitter against Bristol City in 1970! So Hitler is a piece of piss!!!

Only people who want to find something to moan about, will find it in that.
P

K1 flabby stick said:
Have to disagree here, admittedly the Mail is a complete cesspit of a paper it is but just slightly behind cesspitiness of the Daily Express.
Click to expand...

That said I think it might have been a bit of a dig a t Wilders record this season.
Strange way to put it all.
The prince has set out a bit of a pr against wilder since him leaving. That whole interview on sky for starters.

Nice to see Slav speak with respect though, and I do think that post wilder he's best we could get at this time on paper.

I am pleased for Heckingbottom too and think he did a reasonable job in tough circumstances. Do think if wilder was here probably would have picked up comparable points too but take nothing away from Heckingbottom. Seems a good guy.

Scarebus said:
It's just a formal document from the board as a collective which goes on record rather than a media statement from 'the club'.
Click to expand...

Yeah, that's a standard way of writing a resolution of thanks. It's strange that we posted it on the website though.

An Article from View from the John Street
2

Would you want to play for Sheffield United?
2